Perhaps the greatest challenge at the moment is to get more stores and supermarkets to cooperate. Either they are too afraid because of food safety regulations, or they simply do not have incentives and do not prioritize reducing their waste.

This is obviously not true in all cases (otherwise we would not have the cooperations we have today), and small stores are more positive, but dealing with big commercial chains is more sensitive. Their most common strategy is to ignore and avoid, and sometimes we even heard outright lies, like “we don’t have any food waste”, an impossibility for any supermarket regardless how good they are at preventing it.

But we also noticed that some of them are just afraid of the foodsharing model and that they might be held responsible in case someone gets sick, which in practice we know that the risk is very low, because the food is always community-controlled and the people involved take the precautions necessary to guarantee food safety.

One of the solutions worked by german-speaking Foodsharing and by Foodsharing Edinburgh (and probably in other places that I’m not aware of) is to write a legal agreement between food savers and the donating companies, exempting the latter from any liability. 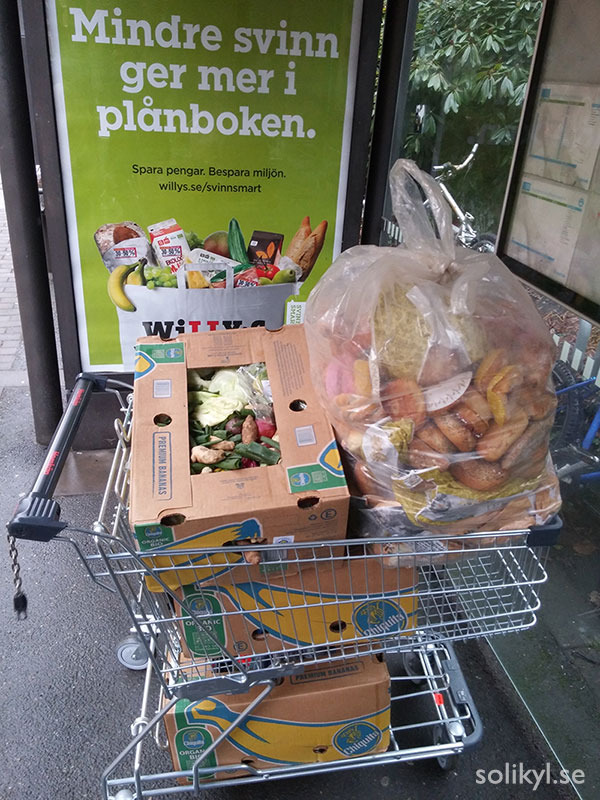 While rescuing some food, we came across a greenwashing propaganda by a big supermarket chain, about how good they are in reducing food waste. They choose only to work with established charities, to which they donate about 0,8% of their total waste. They were not interested in cooperating with us.

That is one solution to be discussed here in Gothenburg, but it needs to be combined with better communication regarding the cooperation that we propose when we contact stores, such as improving our website and handing out informative broschures to dispell any doubts and fears.

I personally like the following strategy: working towards clearing all of their concerns off the way, until we see if these were really legitimate concerns, or if they are just bad excuses. If the latter, then we should escalate and even engage in some public action of shaming, if necessary. We are, after all, offering them a service that will make them save some money in garbage disposal, guaranteeing that food that will be dealt with correctly and that they will not be liable for any misfortune.

There is no excuse for wasting perfectly good food anymore!! And the fight is worth it. We have indeed some evidence that our nagging in one case made the supermarket start donating food to some other more established charity organizations. 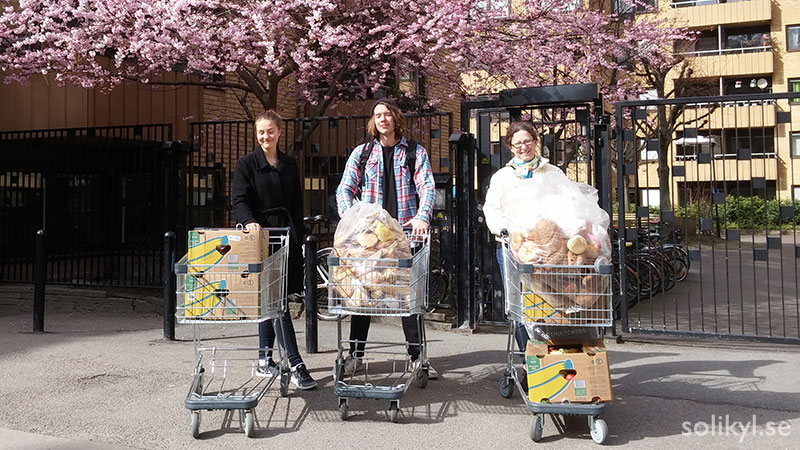 Slowly but steadly the number of foodsavers is growing. The foodsaving tool by yunity has made things easier in this sense

Another challenge that we’ve had, which I personally think is more fun to deal with, is making people understand that we are not providing them a charity service, and that we actually need them to participate in this process and to engage themselves.

It is already clear for most of them that we are non-profit. Less clear though is that people can contribute and actually be actors of change. This is basically something that requires time to communicate and meet people, mainly the public who started coming to our first fridge where now we have regular distributions.

Some people may not have the time or even the conditions (mental or physical hindrances) to help out anyhow, so just the fact that they can come to the fridge and get some food that otherwise would have been thrown away is perfectly fine.

Other people are willing to participate, but bringing them in is also a matter of making it easy for them to participate. Barriers for entry should be low. The more, the merrier.

In this sense, the foodsaving tool developed by yunity has been useful. In the next post I will present the kind of tools we have been using here in Gothenburg and discuss how they’ve helped us in creating community and networks, while prototyping a way to organize on a larger scale to reduce food waste while sharing.